SavvyCard and the Miami Association of Realtors – It Turns Out, We’re Not Crazy.

Last week was big for SavvyCard.   We’ve been working days, nights, and weekends to prepare for the rollout of specially tailored SavvyCard functions to members of the MIAMI Association of Realtors.  On Thursday and Friday we trekked down to the Realtors’ MORE Conference to help members learn more about SavvyCard – and about the MLS search and Property Cards unique to MIAIMI.

Now, some of us have spent years living with the SavvyCard concept, and others have jumped onboard because we saw the simple, powerful appeal of a mobile platform built around an intuitive metaphor.  Now, there’s a whole office full of us who believe that this is going to be a big deal.  Our trip to Miami was going to be a reality check, a step out of the echo chamber to get our hands dirty with real users.  Maybe we’d find that we had lost perspective, bought into our own hype, drunk a little too much of the Kool-Aid on our concept.

And as we introduced SavvyCard to some of our 30,000 new members, it’s fair to say that 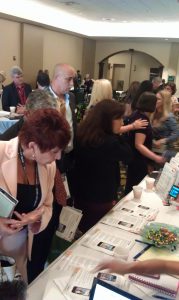 We took eight team members to Miami, and every single one of us was busy the whole time, talking to the constant stream of people who wanted to learn more about SavvyCard.  As we showed MIAMI Association of Realtors members their SavvyCards and walked them through some functions, they got more and more excited.  They let us know exactly how powerful they knew SavvyCard was going to be for them.  We even converted the occasional skeptic.

(You can see more photos of us getting mobbed at our Facebook page).

The thing about SavvyCard is that once you show it to people, they get it.  We now live in a world ruled by mobile, but that world has been missing a key component – something that breaks the chains of the application paradigm, lets people present themselves in a powerful way that they control, and integrates the tailored mobile functions that they need.  Within the next few days, we’ll be posting video of some impassioned testimonials from new SavvyCard converts, and you’ll see the look in their eyes.  The gleam of excitement.  The look that says they’re ready.

The look that tells us that we’re definitely not crazy.

Or if we are, at least we’re not alone.